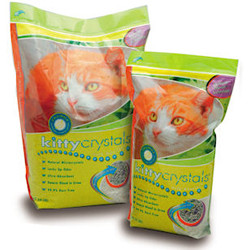 Kitty Crystals® Premium Cat Litter is made of natural Zeolite, an ultra-absorbent mineral crystal that eliminates odor from wetness. Kitty Crystals® exclusive Odorloc™ Technology provides Total Odor Management! Color crystals help block odor from solid waste. Most other cat litter products are primarily clay-based. Clay granules do not trap odors. Fragrances are added to the litter to mask oders. Clay's major feature is moisture absorption, not odor absorption. Kitty Crystals® •Is the only cat litter made from 100% Zeolite •Has similar moisture retention capacity versus clay-based litters •Zeolite white crystals bond and lock-up urine odor and aid in the detection of Cystitis (blood in the urine) •Odorloc™ Technology reduces solid waste odor What is Zeolite? Zeolite is a natural mineral crystal found in the earth. Compositionally, zeolites are similar to clay minerals. Both are alumino-silicates. They differ, however, in their crystalline structure. Many clays have a layered crystalline structure (similar to a deck of cards) and are subject to swelling and shrinking as water is absorbed and removed between the layers. In contrast, zeolites have a rigid, 3-dimensional crystalline structure (similar to a honeycomb) consisting of a network of interconnected tunnels and cages. Water moves freely in and out of these pores but the zeolite framework remains rigid.