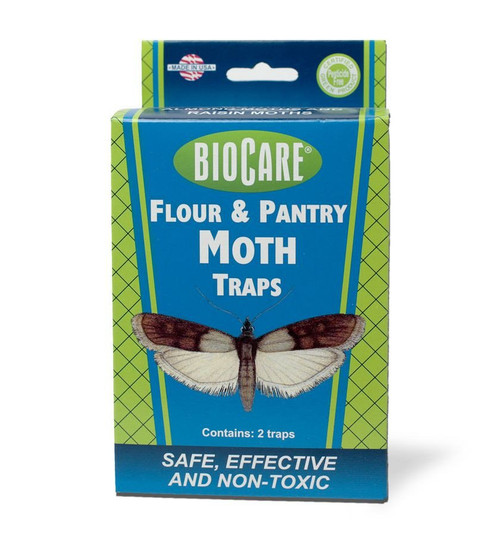 The BioCare® Flour and Pantry Moth Trap attracts and captures adult moths such as Indian meal moth, Mediterranean flour moth, almond moth and raisin moth. These insects occur almost everywhere, and are attracted by grains, flour & pastas. The moths lay eggs in cracks and crevasses near food, such as in shelving, cupboards and pantries. Adult moths emerge and fly about seeking mates. The Flour Moth Lure uses the same chemical messenger (pheromone) that female moths use to attract male moths for mating. Male moths are drawn by the scent and are caught in the trap. Removing male moths prevents mating and egg laying. Long-term use of the Flour and Pantry Moth Trap will reduce troubling infestations without the use of toxic chemicals. Place traps near where moths have been seen. Traps are disposable and extremely effective and safe around food products. Replace every 3 months or sooner if full of moths. Use two traps at a time; they will cover up to 2500 square feet. Using more than two traps at a time tend to confuse the male moths making the traps less effective. Contains 2 traps - ASSEMBLED

This product hasn't received any reviews yet. Be the first to review this product!